turning 15 years old on October 1st 2016. In order to celebrate this we will travel to Lund, Sweden by bicycle. We will leave on Wednesday 28th of September with our office in Delft as a starting point. We expect, and hope, to arrive in Lund on the day of our anniversary. Here we will be welcomed by Qlik employees.

The reason we are cycling to Lund is because Qlik (previously QlikTech and QlikView) was established in this city. Nowadays Qlik’s headquarters are in the United States but the R&D department is still in Lund.  As a Qlik Elite Solution Provider we thought it would be a nice idea to travel up to Sweden to visit the Swedish Qlik office for our 15 year anniversary. Why by bicycle I hear you ask? The reason for this is that a few years ago we cycled down to Freiberg for our 10 year anniversary. We enjoy keeping this tradition alive.

Begin a Qlik supplier, we really wanted to visualize our preparation and the actual journey to Lund. Several consultants participated in the development of a Qlik Sense app. The app displays the route on a map and in a chart. Several maps are used in the app such as Google Maps and ArcGIS. Google Maps is embedded in Qlik Sens through a widget. Widgets are easy to build objects that feature code(html and css) in a frame on a Qlik Sense sheet. These could be KPI objects, visualizations, tables, sheetnavigation buttons or an iframe featuring an external webpage.  Below are several parts of the Qlik Sense Lund app. These are shown using the  Qlik Analytics Platform.

The final sheet of the Qlik Sense app shows KPI’s and graphs regarding the preparation and training that E-mergo employees have done.  For instance it shows who completed the most kilometers and who was the fastest. The trainingrounds are displayed using Instamapper and statistics regarding speed and distance are gathered by Stava. Just like other known cloud platforms such as Facebook, Twitter and Google Analytics, Strave offers a REST API that can be used to create a connection with Qlik though the REST Connector. Using this connector we can load data from Strava, combine it in Qlik Sense and display it with visualizations.


These visualizations were made in Qlik Sense. Qlik Sense software is available to download here for free

During the bicycle tour E-mergo employees will collect GPS coordinates using the Instamapper app on their cellphone. These coordinates are sent and saved every minute on an E-mergo server and then transferred tor ArcGIS Online (ESRI’s cloudplatfrom). New coordinates are automatically projected onto a map by ArcGIS Online. This makes it possible to track E-mergo’s cyclists in near real time during their journey to Lund. Next to displaying the progress of the journey to Lund, the app is also useful right now. Employees notice that the Qlik app has a motivational effect because it shows coworkers training efforts. This way everyone can see exactly what efforts coworkers are putting in to their preparation, which motivates other coworkers to get on their bike regularly as well. 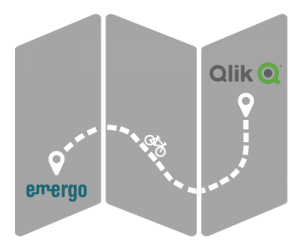